The 2012 Minnesota Vikings are already in trouble.  Last season, they went 3-13, and by looking at this upcoming season’s schedule, I see maybe one game that they can possibly win.  With their All Pro running back coming off a gruesome injury, a second year quarterback who has only one viable receiver, who, by the way, demanded a trade, this very week.  They still have a couple of weapons on defense, and they drafted a stud offensive lineman in the offseason.  But none of that will make them a viable team in 2012.

Adrian Peterson has been holding it down for Fantasy Footballers for years now.  He has been a top 5 fantasy player ever since he came into the league.  That could all end this year, due to the horrific injury he suffered last year.  Many have questioned whether he will ever play again.  Apparently, he’s gonna try.  So because of that, you can’t count him out.  Toby Gerhart did a decent job filling in for AP, but he’s no Peterson and no stud.  Percy Harvin, who asked to be traded, is another stud….when he’s on the field.  He has suffered from migraines which impedes his ability to even get suited up.  But when he plays, he’s electric.

Area of Strength:  It will be interesting to see if there will be any areas of strength for the Vikings this season.  The running game will be featured a lot, even if Peterson isn’t a factor.  Gerhart is a bruiser, but he lacks swiftness and quickness.  He can be an asset as a good pass catcher out of the backfield.  Another possible strength is the Minnesota defense.  Jared Allen is still a monster, and will wreak havoc in the opponent’s backfield.  He will also continue to hog tie QBs even while being double and triple teamed.

Area of Weakness:  The Vikings still have their work cut out for them on offense.  And with an unstable passing game, it’s going to be an uphill battle.  Christian Ponder is capable, and he will definitely get some much-needed help from new draftee Matt Kalil on the offensive line.  But outside of Harvin, there are no other decent receiving options.  The other receivers are not worth mentioning, so I won’t.  So, needless to say, the passing and   receiving  game will struggle through the entire 2012 season.

2012 Marquee Matchups:   Aside from the divisional games, the Vikings have a few other match ups.  Week 3, they face the 49ers.  Week 6 AP goes back to Washington where he acquired his injury last season. Close to Christmas, they head to Texas to face the Texans Week 16.

Fan Clubs:  The official fan club for the Vikings can be found on www.vikings.com under fan zone.

Sunday in the Skybox: NFC North

The NFC North consists of the Chicago Bears, Detroit Lions, Green Bay Packers, and Minnesota Vikings.  Last season, the Packers were the odds on favorite to repeat as the Super Bowl champs, the Vikings put their hopes in Donavan McNabb as their QB, the Bears were the reigning division champs, and the Lions were just looking for a seat at the table desperate not to be last in the division.  Green Bay went 15-1, but failed to return to the Super Bowl after fielding one of the leagues worst defenses, the Bears  failed to make the playoffs after a mediocre 8-8, Minnesota struggled to go 3-13, benching McNabb and promoting rookie QB Christian Ponder as the starter, and Detroit made it’s first playoff appearance since Barry Sanders was running the pill.  In the upcoming season, i really don’t anticipate it being any different in the outcome.  The Pack made some necessary improvements on defense, and even though the Lions have had a tumultuous off-season with many arrests and unrest in the locker room, they still will make the playoffs, barring any major injury.  Chicago should improve, especially with the acquisition of Brandon Marshall,which finally gives Jay Cutler a target that he can rely on, but they still have a ways to go to get back to the playoffs.  The Vikes, however, will continue to struggle.  It’s hard to say if Adrian Peterson will return to elite status after a crushing ACL injury last season.  There are a lot of unanswered questions about the NFC North.

Division Superstars: This division is stacked with Superstars!  Superbowl winning QB Aaron Rodgers of the Green Bay Packers and Probowl RB Adrian Peterson of the Vikings have been wonders for fans and fantasy footballers.  Monster LBs: Clay Matthews of the Packers, Jared Allen of the Vikings, Ndomk Suh of the Lions all wreak havoc in this divison.  Let’s not forget about rockstar return man Devin Hester of the Chicago Bears.  Speaking of WR, Calvin “Megatron” Johnson holds down this division in Detroit.

Bad Blood in this Divison:   Ok, does everyone remember the game on Thanksgiving last season when the Packers played the Lions?  Do you remember the Stomp Heard Around the League?  It was brutal, just in case you forgot.  The game, itself was very competitive.  It was nice to see that the Lions play like actual lions instead of years of gobbling like a turkey on Thanksgiving.  There is definite bad blood between the two teams, but I really don’t think it stems solely from the Stomp.  The Lions are a really good team with great weapons on offense and a very good defense.  They are a challenge to the Pack for the division title.  There’s your bad blood right there. 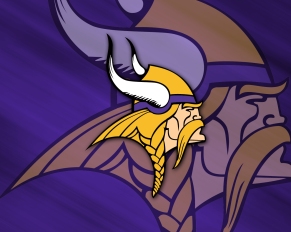 When it comes to Fantasy Football RBs, you know who it is: “ALL DAY” Adrian Peterson!  Hard to believe AP is going into his 5th season, but Fantasy Footballers have enjoyed every minute of his career!  Infamously, his flaw used to be the FUUUUMMMMMMLLLLEE practically every week.  Last year however, AP only fumbled the ball ONCE all season long–What an improvement!  Let me tell you why Peterson will be a MUST DRAFT again this year on Fantasy Football draft day:

THE VIKINGS WILL HAVE TO RUN THE BALL…A LOT!  Going into this season, the Vikings have 2 new keys that are essential to any offense: 1) A new offensive coordinator and 2) a new QB.  As you know, the Vikings shocked the 2011 draft world (I guess such a thing exists, right?) by drafting rookie Christian Ponder.  Ponder is dubbed by “experts” for having a weak, but accurate arm.  With that being said, I don’t see the Vikings lighting it up down field, if Ponder is their starting QB this season.  Peterson has proved his reliability!  Last year, Peterson rushed for 1,298 yards and had 13 TDs.  I’m sure in an effort to not over work Peterson, Toby Gerhart will get more carries this season. However, Adrian Peterson still owns the Minnesota back field.

I imagine that the most asked question in Minnesota has to be, “Who is going to start at QB?”  Good question!! My answer:  I have no idea!  I’m willing to bet Coach Leslie Fraizer knows.  Last year the Vikes had horrible QB play.  I won’t even bother to bring up #4 and the paltry fantasy numbers that he produced in 2009.  Well that’s a lie…Farve had 2509 yards, 11 TDs, 19 INTs, and 5 fumble losses.  On the flip side, he was also sacked 22 times!  Tavaris Jackson and Joe Webb combined for 818 yards, 5 total TDs, and INTs in 8 games!  HORRIBLE.  So with Farve gone for good and questions about Jackson, the Vikings are in limbo when it comes to their signal caller.  Insert Boy Wonder, Christian Ponder from Florida State.  Ponder is a big presence standing at 6’3, 227lbs.  No doubt he is the Vikings QB of the future, but will he take snaps this year?  There’s been a lot of buzz about the possibility of disrespected QB Donovan McNabb coming to the Twin Cities…Who knows?  McNabb would actually be a good fit if that happened, but again….who knows?  There are too many unanswered questions surrounding the Vikings QB situation, so  when you have your Fantasy Football draft: DON’T EVEN THINK ABOUT IT!

THIS I know for sure: You won’t see Randy Moss as a Minnesota WR this year!  The rest of the Viking WR core is a bit more questionable.  The star of this crew is Percy Harvin.  Going into his 3rd season as a professional, the 2009/2010 Offensive Rookie of the Year has some work to do in order to overcome his sophomore slump.  Harvin had a stellar rookie year, making him a MUST DRAFT last season for Fantasy Footballers.    However, last year several factors contributed to Harvin having a mediocre season. Between the issues with recurring migraines and the inconsistency of Brett Farve, it wasn’t Harvin’s best season.  Last year he did manage 868 receiving yards and 7 total TDs.  What made Harvin great his rookie year was his return game, while this past season he only returned 1 TD.  Next up is Sidney Rice.  Rice also had a breakout season in 2009, but Fantasy Owners didn’t get to see much in 2010.  Rice had hip surgery, then when he came back…the love was gone.  No chemistry between him and Farve. (Did anyone have chemistry with Farve?) Then Rice’s season officially ended with a concussion.  Dis-AAAAHHHHH-Pointing!  The rest of the Vikings WRs ( Bernard Berrian, Greg Camarillo, Greg Lewis, Hank Baskett, Jaymar Johnson, and Juaquin Iglesias) were not a factor for any Fantasy Roster last season and my best is they will not be much of a factor this coming season either.

There maybe some surprises this year at TE.  Visanthe Shiancoe had a breakout season a couple of years ago, but came back down to earth last year, though it was not totally his fault.  I look for him to rebound to Fantasy prominence, especially with the addition of rookie TE Kyle Rudolph out of Notre Dame.  He’s a big target at 6’6″, 265lbs.   I expect the Vikings to use those two TE sets that will help open up that offense.  It’s ok to draft Shiancoe.  Rudolph will be a sleeper this year, and a future Fantasy stud.

The Vikings Defense has been  great for Fantasy players in the past. They had Jared Allen and Ray Edwards killing QBs, the Williams brothers (not really brothers) clogging up the middle and stuffing ball carriers, EJ Henderson wreaking havoc in the offensive backfield, and Antoine Winfield covering #1 receivers without always getting torched.  Now, Edwards is off living his Evander Holyfield fantasy, one half of the Williams brothers is a free agent and both facing suspension, and Winfield past his prime.  Even Allen is starting to show signs of slowing down.  However, the Vikes were able to get some young talent in this years draft.  No big names but we’ll see what they will be able to put together on the field.  Keep in mind, Coach Frazier is a brilliant defensive architect, so they should be ok.  Special Teams is not all that special.  Percy Harvin has shown flashes of  DeSean Jackson/Devin Hester, but not enough flash.  He’s always a game-time decision.  Keep the Vikes Def/ST in your back pocket when your draft comes around.  Don’t draft them too high, they still have a chance of being a bust.

Motor City…we are talking about your LIONS next!