Last night’s installment of Hard Knocks gave an in-depth look into the human side of the NFL and what it’s like for a young player.   We first take a look at rookie QB Ryan Tannehill, who is fresh off being named the starter, ask another player about another player.  Apparently, that particular player that he asked about was cut, which was unknown to the rookie signal caller.   We see the inevitable fate of rookie TE Les Brown, who has struggled the entire preseason.  The Dolphins were banking on Brown  to be the next basketball player turned elite TE, but because of his ineptitude at blocking, he became a liability.  Brown was noticeably upset, and it was sad to see, but it definitely wasn’t the saddest part of this episode. END_OF_DOCUMENT_TOKEN_TO_BE_REPLACED

This weeks’ episode of Hard Knocks picks up after the Chad Johnson fiasco.  LB Karlos Dansby told the media of his disappointment in the organization not standing behind Chad.  The rest of the team apparently had mixed feelings, but I found it very interesting to see that team leaders, which consisted of Dansby, Reggie Bush, and Jake Long, meeting with Coach Philbin, about starting a “peer counseling” group to keep players on the straight and narrow.

Chad’s absence  brings a bigger problem:  Who do the Dolphins have to fill the spot at receiver?  Last night, we saw a bevy WRs that weren’t particularly impressive.  Philbin said that his gut told him that Chad wouldn’t fit on the team.  What is his gut saying now? END_OF_DOCUMENT_TOKEN_TO_BE_REPLACED 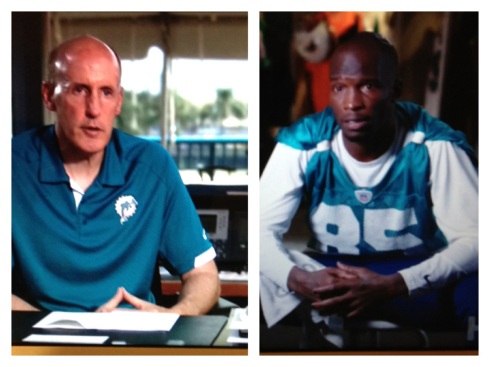 This week’s installment of HBO’s Hard Knocks was really good television.  I’m not quite sure what I expected to see, but most of what I saw was completely unexpected.  It may have been one of the best episodes of the program that I have ever seen.  Here are 10 of the most riveting and entertaining moments of tonight’s episode:

10.  Ryan Tannehill singing “Lean On Me” in a team meeting

7.    Mike Sherman telling a struggling TE that he would cut him today if he were the GM

6.    Dolphin great Bob Griese asking about Tannehill. The past interested in the future

3.    Offensive line and their Band of Brothers mentality

2.    Coach Philbin opening up about the death of his son in December

1.    Chad Johnson: I heard about it, but him getting cut was shocking.  He came straight in from jail.  A very shameful and apologetic Chad reminded his coach that he’s never been in trouble before.  Philbin’s response:  This is not the right fit, things aren’t meshing. It was just sad to watch.  Unfortunately, this is a pitiful way to end a productive career.  This show has always done a remarkable job giving fans an inside few of what happens during training camp.  Hands down, the most intense Hard Knocks episode I’ve ever watched.

Last night marked the return of Hard Knocks on HBO, which features the Miami Dolphins.  We haven’t had the privilege of seeing a team this up close since the HBO highlighted the Jets two years go.  Needless to say, it’s good to have Hard Knocks back.

The start of the program shows many things.  We see new head coach Joe Philbin, who looks a lot like legendary cab Tom Landry, as he meets with his coaching staff to discuss roster moves and casualties.  Next players begin checking into what looks like a 4 star hotel at the beginning of training camp.

Owner Stephen Ross is peppered with questions about why he kept Jeff Ireland as the general manager, even after the bad seasons.  Ross tiptoed around the question, only to say that it’s a new season and he expects success.  Ireland is a familiar face, but there are few new faces in the bunch.  There’s rookie QB Ryan Tannehill, who was an early camp holdout.  There’s also veteran signal caller, David Garrard.  Tannehill is the future, but Garrard started training camp at the top of the depth chart, with Matt Moore in the second spot behind Tannehill.  This may be the most entertaining quarterback controversy.  It’s great to be able to see this unfold on tv. END_OF_DOCUMENT_TOKEN_TO_BE_REPLACED

The Miami Dolphins have a rich tradition of  undefeated seasons, Super Bowl wins and appearances (how can we forget the Wildcat).  Sadly, the most recent history has been losing season after losing season.  I don’t expect anything different this upcoming season.  The Dolphins have no playmakers, save Reggie Bush, since they traded away the best player they have had in recent history, Brandon Marshall.  They dumped Tony Sparano as their head coach, hiring rookie coach Joe Philbin.  They also missed out on the services of Peyton Manning, and placed their future in the hand of rookie WR turned QB, Ryan Tannehill.  Then just yesterday, it was announced that HBO will profile the team on Hard Knocks this year.  The whole nation will be able to see exactly what all of this looks like for the Dolphins.  Who will emerge as the darling of South Beach on HBO:  the rookie Head Coach, who recently loss his son to a tragedy, the rookie newlywed QB, or will it be a veteran like Bush?  Exciting times in Miami even if the football is bad.

Fantasy Football Studs:  Well Reggie Bush had a pretty good year for his first year as a Dolphin.  He started off kinda slow but ended the year with 1086 rushing yards and 7 combined TDs, the most of anyone on the current roster (bye-bye Brandon Marshall).  Experience has taught me that Reggie Bush himself may be a stud, but he’s no fantasy football stud.  Those are hard to come by on the Miami Dolphins END_OF_DOCUMENT_TOKEN_TO_BE_REPLACED

Sunday in the Skybox: AFC East

The American Football Conference-Eastern Division (AFC East) will kick off our Sunday in the Skybox team by team 2012 Preview.  This division (composed of the Buffalo Bills, Miami Dolphins, New England Patriots and New York Jets) has a combined total of 6 Superbowl wins.  Superbowl XLVI runner-up New England Patriots have controlled this division over the last decade winning 8 of the last 10 Division titles.  Another fun fact about this division is that it could be renamed, the Bill Parcells division.  Parcells himself coached for the New England Patriots and New York Jets.  Most recently Parcells was Vice President of Football Operations for the Miami Dolphins.  Over the years, current and former head coaches such as Bill Belichick are from the Bill Parcells coaching tree.

Bad Blood in this Division: There has been long-standing rivalries in this division.  One of the biggest rivalries in football has always been the Jets and the Dolphins.  These teams have gone back and forth in some hard-fought games giving the Jets the overall advantage of 47-43-1.  The Dolphins have also had their battles with the Bills, meeting in the playoffs 4 times.  The most recent rivalry has been with the Patriots and the Jets.  It has mirrored the bad blood similar to the baseball Yankees and the Red Sox.  The Jets have mostly played second fiddle to the Pats, but NY has been competitive in recent years, playing the Patriots in playoff battles twice in the past six years.

Recently, there have been quite a few great moments between the teams in this division.  In 2008, the Dolphins pulled an upset win (38-13) over the Patriots using the WildCat offense.  Sadly Dolphins fans can’t shake the memory of a 41-14 loss to the Patriots during Monday Night Football in 2010.  The next day, the Dolphins fired Special Teams coach John Bonamego for managing to give up 21 points in huge special teams mistakes.  We all loved watching the battles between Randy Moss as a Patriot vs CB Derrelle Revis of the Jets.  Speaking of Revis, he called New England Patriot head coach Bill Belichick a “jerk” during a word association game played on ESPN againt Patriot TE Rob Gronkowski–awkward. END_OF_DOCUMENT_TOKEN_TO_BE_REPLACED