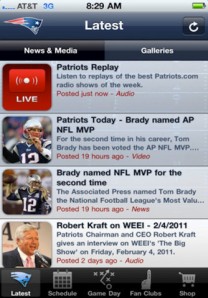 Usually the New England Patriots have a quiet off season.  As usual they had an impressive draft acquiring many players that will help their last place 2011 defense.  But it seems as if one of the team’s offensive weapons is having some financial issues, and not afraid to talk about it openly, which is a known Patriot no-no.  Wes Welker, coming off his best statistical year, is in a contract dispute.  It was a good sign, when the Patriots signed Welker to the franchise tender.  But when Welker told the media that negations had gotten worse, it didn’t sit well with the Pats brass. Not the usual quiet off season for the New England Patriots.  With a great draft and a relatively easy schedule, many pick the Patriots to repeat as the AFC representative in the Super Bowl.  Here is a look at the upcoming season for New England:

Fantasy Football Studs:  TE Rob Gronkowski had a MONSTER season in 2011–90 catches and 1327 yards to be specific.  TE Aaron Hernandez is not to shabby either with 79 catches and 910 yards.  Tom still loves throwing to WR Wes Welker, the recipient of 122 catches and 1359 yards.  The difference between the 2 TEs and WR? Gronkowski had a crucial 17 TDs!  None of this could happen without the Patriots leader and top weapon: Tom Brady.  I dont’ have to convince you but just incase, how does 5325 yards and 39 TDs sound?

Area of Strength:  When you have Tom Brady as your quarterback, your offense is in pretty good shape.  I would venture to say, great shape.  Brady doesn’t seem to be slowing down, and with Belichick giving Brady the green light, expect to see the passing game in full gear.  Brady has an abundance of targets with Welker,  Rob Gronkowski, Aaron Hernandez, and Deion Branch, but the Patriots added some additional artillery with Brandon Lloyd, Donte Stallworth, and Jabar Gaffney.  The Patriots passing game is its greatest strength.

Area of Weakness:  I’m concerned about the running game of the Patriots this season.  When a team is ranked 31st in total defense, of course said team will direct their draft day focus on improving its defense.  The Pats utilized free agency to build strengthen its receiving core.  But with the loss of Benjarvis Green-Ellis (not even with a monster season last year by the way), it doesn’t seem like the Patriots made an effort to address this part of the game.  I guess when you have Tom, it may not matter.

While the defense of the Patriots has a lot of new faces, these faces are young and inexperienced.  I believe there will be improvements this season but I don’t expect the team’s defense to go from 31st to 4th in the league.

2012 Marquee Matchups:  Many so-called experts have said that the Pats have the easiest schedule this upcoming season. But when you are in division when you have to play the Jets, the Dolphins, and the Bills twice a season, and when you had the worst statistical defense last year, it might not be as easy as you think.  In addition to the divisional games, there are two key match-ups that should be highlighted:  Week Three at the Ravens, and Week Fifteen at home against the Niners, which could be a Super Bowl preview.

All Things New England Patriots:  There are several ways to keep up with the Patriots this season.  Here are a few suggestions:

Fan Clubs:  The team’s official fan club can be found on their site www.patriots.com  under fanzone.

He Said She Said Football is a blog written by Daryle McGhee and Jeanita Morris. We simply LOVE the game. We write this blog for fun and encourage your comments! If there is a topic you'd like us to discuss, comment or email us at hesaidshesaidfootball@gmail.com END_OF_DOCUMENT_TOKEN_TO_BE_REPLACED
This entry was posted on Monday, May 28th, 2012 at 6:23 AM and tagged with 2012 Preview, New England Patriots, Rob Gronkowski, Tom Brady and posted in 2012 Previews. You can follow any responses to this entry through the RSS 2.0 feed.
« Sunday in the Skybox: AFC East
2012 Preview: New York Jets »