She Said: Great Day to be a Redskins Fan

Just 2 days after he was drafted by the Washington Redskins, Robert Griffin III made his way to the nation’s capital.  There were reportedly 19,000 people waiting to welcome him.  I was one of them.  We arrived to Fed Ex Field 3o minutes prior to the start of the Washington Redskins Draft Party and joined a sea of burgundy and gold clad fans! Ladies and gentleman, boys and girls, people from all walks of life were out there ready to celebrate the Redskins.

Before taking the field for the RGIII press conference, I attended the Draft Party event hosted by the Women of Washington (WOW) Redskins. WOW Redskins is a fan club just for the ladies.  Boy, did I have a great time!  Not only did I get a chance to network with some incredibly wonderful, football savvy ladies; but I also met a few Washington Redskins.  My favorite of the bunch was Ryan Kerrigan, last year’s 1st round pick of the Redskins.

END_OF_DOCUMENT_TOKEN_TO_BE_REPLACED

What a great Round 1 of the 2012 NFL Draft!  Our game plan was to be around as many fans as possible!  Since I am a Redskins fan and we live in Washington DC, heading to Fed Ex Field on Draft Day was a no-brainer!  There were far more fans at the stadium than I expected.   Hundreds came out on a slightly rainy day to celebrate the newest era of Redskins football.  I checked out awesome things such as a display of the late Sean Taylor’s locker and the Redskins history wall.  I also pretended to be Brian Orakpo. 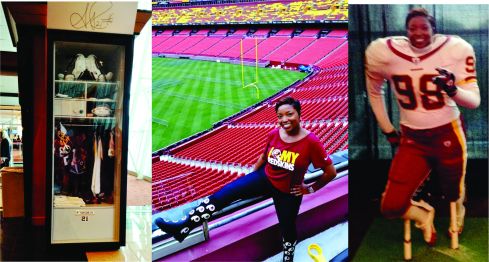 While we had a great time at Fed Ex, we wanted to hang out with other fans too.  Plus D was a trooper for going, but I think all the Burgundy and Gold was making him ill.  We decided to head to another Draft Party where fans of other teams would be watching and celebrating.  Redline Sports Bar in downtown DC is where we actually watched the draft.  Check out the crowd’s reaction to the drafting of Robert Griffin III:  END_OF_DOCUMENT_TOKEN_TO_BE_REPLACED

We Are ONE Year Old! 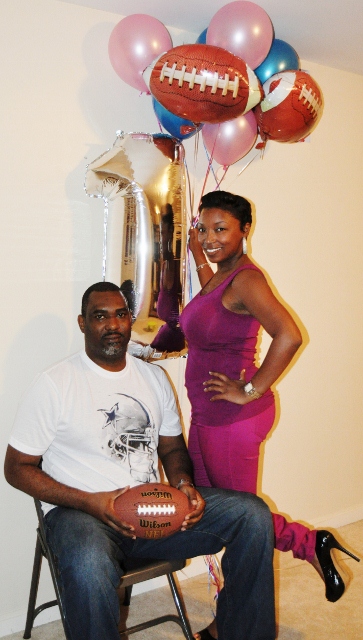 As you know, we are HUGE football fans.  We’ve had many football centered conversations.  A year ago we chose to take our ongoing conversation public.  Initially, we were looking for an outlet and wanted to connect with other fans.  As a result, we decided to start this crazy journey to create He Said She Said Football!

I have no idea what we were thinking when we came up with the concept for He Said She Said Football.  In its infancy stage, even before we decided to write the blog, this was about one thing and one thing only:  Fantasy Football.  J was the first woman who I had ever met that was as serious and passionate about fantasy football as me.  Not just fantasy, but football in general.  We each played in separate leagues for years, even running our own separate leagues.  We would bounce ideas about who to start and who to sit, what match-ups to exploit, who was garbage, and who was a sleeper.  It was a weekly ritual for us, until one day we decided we should play in the same league.  That’s when He Said She Said was born:  Guys against the ladies, in a head to head fantasy football league.  But it didn’t stop there–we should write about it.  We actually had the audacity to think that people would want to read about our competitive relationship revolving around football.  We had no idea that after one year, we would still have things to discuss. END_OF_DOCUMENT_TOKEN_TO_BE_REPLACED

I have a confession:  Football is not my first love.  I’ve had a life long love affair with movies.  Some of my favorite movies actually featured former gridiron greats:  Fred Hammer Williamson, Jim Brown, OJ Simpson (sorry, but those Naked Gun movies were HILARIOUS).  I thought I would use this platform to highlight my all time favorite football movies.  Here are my top 5 faves.  Let’s go to the movies:

5.  Varsity Blues – A great movie about the fictitious, but believable West Canaan Coyotes.  In this small Texas town, high school football was supreme and players were treated like gods.  Jon Voight was fantastic as the sadistic coach who would stop at nothing to get one more district championship. END_OF_DOCUMENT_TOKEN_TO_BE_REPLACED

She Said: Thanking Nike this Thursday

The most exciting NFL related event this week was the Nike launch of the new NFL uniforms.  I was not among the privileged to go to the launch event live in NYC.  As a result, I refreshed Twitter a thousand times trying to keep up with all the live tweets of the event to see pictures and such.  Nike deserves a lot of credit.  There was a lot of hype for this event.  The hype continued during this launch.  The launch started at 11am and it was close to 12 before we got to see the goods!  After all the fuss, the uniforms for the most part pretty much look the same.  Don’t get me wrong, the uniforms look great.  I love the sleeker design, but there were not the drastic changes I was expecting.  Clearly I feel victim to the leaked photos on the internet showing other design prototypes.    The best part of the uniforms were the gloves (love them!) and the shoes.  Accessories! Nike knows how to impress a girl like me!  Give me some sexy accessories any day-they make the outfit!  END_OF_DOCUMENT_TOKEN_TO_BE_REPLACED

We want to take this time during the off-season to recognize broadcasters, commentators, and analysts.  During this day and age of media and technology, sports talk is an aspect of the game that we really enjoy.  For this segment of “Athletes Turned Analysts”, we discuss two guys that truly belong on the tube! END_OF_DOCUMENT_TOKEN_TO_BE_REPLACED