Last week, HE SAID She SaidFOOTBALL began to take a look at this year’s Heisman hopefuls not named Luck.  We started it off with Clemson  sophomore QB Tajh Boyd, who tonight leads his team against ACC foe Georgia Tech. 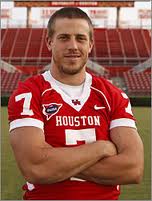 This week, we want to highlight Houston  Sr. QB Case Keenum.  In Keenum’s most recent performance, he led the Cougars in a 73-34 victory over Rice.  “Led” is actually a complete fabrication and understatement.  Keenum went on to throw for 534 yards and 9 TDs!  He also broke the record for TD passes in college football with 139 career touchdowns, adding to the record he broke last week for total offense in a college career.  Though he has a stellar career which has spanned over 6 years due to a horrific knee injury early last season, Keenum is considered a longshot for the Heisman.  ESPN has him #7 on their experts poll.  Houston is currently undefeated and has done so in convincing fashion.  They have outscored their opponents 418-198, and with 4 games left, they have a good chance of finishing the season undefeated.  Even with that, the Cougars will not be given any serious consideration for a National Championship.  Also, because Keenum doesn’t face to any real competition in Conference USA, he may not receive the votes needed to win the Heisman.  However,Case Keenum should receive notice from some of the voters, and even more important, NFL scouts.  He may not be a household name now, but let’s see how things play out for Case.

The man of He Said She Said Football. I'm a die hard fan of America's Team: The Dallas Cowboys. I'm heavy into Fantasy Football, game day eats, and The U football. END_OF_DOCUMENT_TOKEN_TO_BE_REPLACED
This entry was posted on Saturday, October 29th, 2011 at 9:56 PM and tagged with Case Keenum, college football, Conference USA, Cougar, ESPN, Heisman, Houston, Keenum, Rice and posted in He Said Football. You can follow any responses to this entry through the RSS 2.0 feed.
« All About the U? Tell them that in VA!
He’s Mad…She’s Mad…and Nobody Knows ANYTHING in Week 8 »