DA-DA-DA-DAAAAA! What a Monday Night It Was…

We watched our favorite teams (The Dallas Cowboys for me and The Washington Redskins for her) go for it on Monday Night Football this week.  Our venue of choice was the Penn Quarter Sports Tavern.   The main reason this venue got my vote was because there were LARGE, CRYSTAL CLEAR HIGH DEFINITION TELEVISIONS wall to wall everywhere!  The menu has your typical sports bar food (burgers, pizza, wings) and the prices were great.  Especially the half off wings after 7pm!  We had a few friends show up and we took over the best spot in the house:  the second floor right against the wall where you could see about  8 TVs lined up on the opposite wall!   Talk about the perfect venue!

A bartender told me the place was very popular with people who are not from DC and people who like teams that don’t get as many national games as say your Steelers or (ahem) Cowboys.  There is a consistent following of Denver Bronco fans and Seattle Seahawk fans.
The day that is also awesome for this place is Saturday!  With all of the TVs lined up, you are bound to catch the game you want. Its easy to read the labels they have for what game is going to get played on each tv.  There is a huge following for a number of college teams as a result.  We had a great time and the crowd really got into the game (as expected).  If you live in or visit the Washington, DC Area, it’s certainly a place to go check out the game.  Check out the mini video below and visit www.dcsportstavern.com.
As far as the game…Tony Romo didn’t make that crucial mistake at the end of a game and he put us in position to win.  I’m going to relish in that Cowboys win proudly.  So what if we couldn’t get in the end zone….So what if the Skins passed the ball all over the field at times……So what if we couldn’t protect the ball like we should have……I can go on and on and on…….But the most important thing to me was that my favorite team won and I don’t have to deal with Skins fans for a couple of months til the next time the two teams meet.  Yes, I still have to deal with varying degrees of HATE but that’s expected based on my relationship with a certain sexy Skins fan and based on the city I chose to call my home.
I will be the first one to say “A win is a win” so I have to also say “A loss is a loss”!  How my Skins lost that game last night still has me miffed!  That game was in the bag!  That’s the thing about football though…you have to play all 4 quarters.  My squad just simply did not close the game.  I know MANY people are crushing Haslett today for making them bring the house on 3rd and 21, but I was the loudest one screaming SACK HIM at the time! And at that time, I’m sure if Romo was sacked, then no one would question the call…Then again,  I’m no defensive coordinator! I just know losing like that was a HORSE PILL to swallow!   I also firmly believe that defense was not really the problem during this game.  It was what has plagued my Redskins for years-the REDZONE OFFENSE!
But DC has been SO live this week! I loved it and love the rivalry especially between me and D!  We had a great time and to all of those on Twitter checking up on us and making sure we were ok-He thanks you!
Here are a few pics from the night: 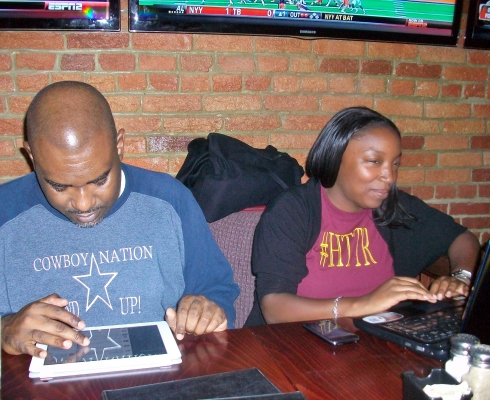 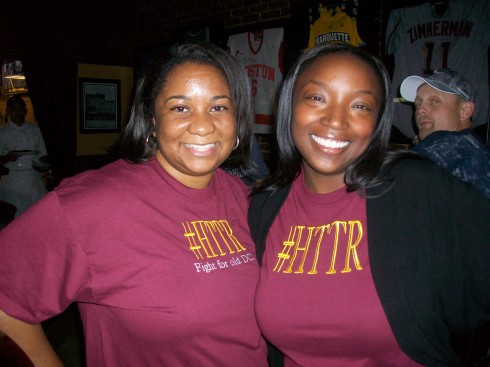 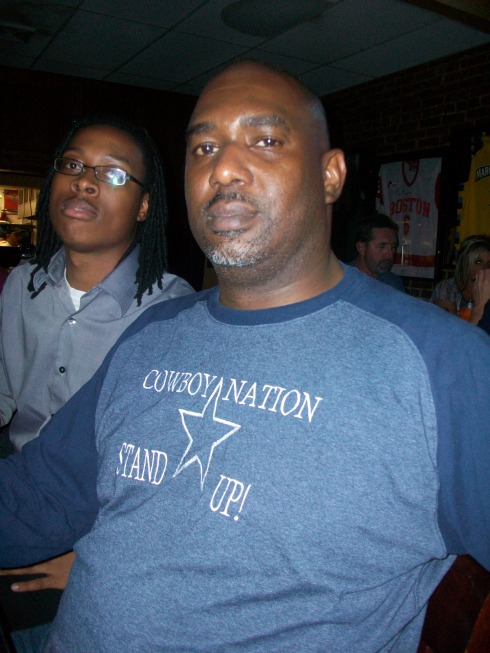 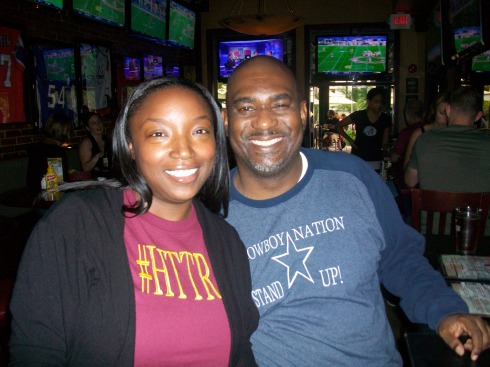 He Said She Said Football is a blog written by Daryle McGhee and Jeanita Morris. We simply LOVE the game. We write this blog for fun and encourage your comments! If there is a topic you'd like us to discuss, comment or email us at hesaidshesaidfootball@gmail.com END_OF_DOCUMENT_TOKEN_TO_BE_REPLACED
This entry was posted on Tuesday, September 27th, 2011 at 9:17 PM and tagged with Dallas Cowboys, Denver Bronco, HTTR, Monday Night Football, Penn Quarter, Romo, Seattle Seahawk, Skins, sports, sports bars, Tony Romo, Washington DC, Washington Redskins and posted in NFL. You can follow any responses to this entry through the RSS 2.0 feed.
« The Underdogs are stomping with the BIG DOGS…Week 3
LADIES VS FELLAS WEEK 3! »

2 responses to “DA-DA-DA-DAAAAA! What a Monday Night It Was…”